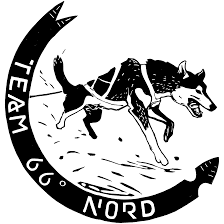 The TEAM 66° NORD was created by two men driven by the same passion for the great outdoors, their fascination for an ancestral means of transport, the dog sled, and their love for a unique dog breed, Alaskan huskies.

In 2011, Romain was the handler of Daniel Juillaguet, famousa French musher, who participated in La Grande Odyssée for which Thibaut was then the head of sports communication. The friendship between the two men soon grew, based on common passions and values.

Meanwhile, Thibaut participated in his first races and in his second year of competition, he won the bronze medal at the French dog sledding championships.

The creation of TEAM 66° NORD was the natural outcome of this partnership, leading to a more professional pooling of skills, resources and energy.

1997 Training with the Compagnons du Devoir
2003 Graduated as a Compagnon Carpenter & Cabinetmaker
2005 Returned to the Cantal and acquired my first sled dog
2006 Construction of a log cabin in which we lived for 4 years
2009 Life changing encounter with Daniel Juillaguet and purchase of Ayo and Duke, my first Alaskan huskies.
2009 Creation of Romain Grenier Menuiserie
2011 Handler on La Grande Odyssée and on the Finmarslopet for my friend Daniel Juillaguet. Met Thibaut
2012 First major race, the Trophée Grande Odyssée (arrived 5th)
2013 Victory in the Double Trophée 350km race.
2014 First participation in La Grande Odyssée
2015 7th place in La Grande Odyssée
2015 Amundsen Race (Sweden)
2016 Femundlopet 400 (Norway)